This week I'm working on another project from "More Crocheted Socks: 16 All-New Designs" by Janet Rehfeldt and Mary Jane Wood.

So far I absolutely love this book. Picked it up from KnitPicks during one of their 40% percent off sales, and it as been a wonderful investment!

The first socks I crocheted from the book were "Victorian Day Dream" in a sparkly light colored wool blend. They turned out really well and I wear them all the time. I've also crocheted "Cotton Candy Confection" which I admit is even more ridiculously girly than the previous pair. So I decided my next project ought to be something a little less frilly, pink and feminine.

One of the awesome things about living in Uptown is the wide variety of well-stocked thrift stores. I was visiting one of my favorites when I discovered this yarn, which demanded to become "A Little Zig, a Little Zag" 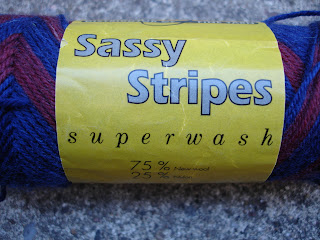 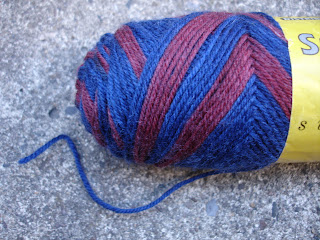 I have no clue how old this yarn is, but the paper is yellowed and the label looks a bit dated. Probably has been sitting in someone's stash for years. Thank you kind knit- or crocheter out there for donating this yarn, which I bought for a whopping 50 cents. 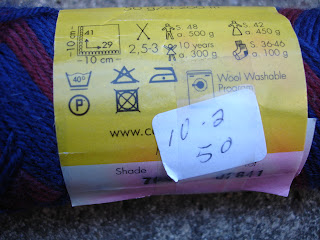 "A Little Zig, a Little Zag" has an intermediate skill level, but if you can comfortably crochet around the front and back post, as well as crochet in the back loops, you'll be set for this pattern. The pattern is really well written, and I haven't had many head scratching moments, or frustration at having to frog half the sock because of awkwardly worded instructions.

I'm almost done the first sock. I know you should crochet both socks at the same time so that they end up with approximately the same tension, but I am kind of lazy in this respect. 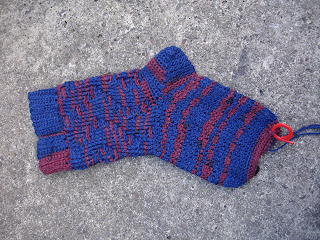 The zig zags aren't as pronounced as they are in the book's photos, because I've used a different yarn. It's a bit darker, with fewer color changes, so it doesn't show off the stripes as well. However, I love the texture of the socks. They feel awesome, and you can see the zig zags better in a close-up. 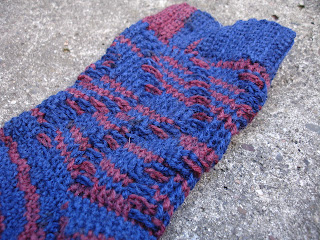 The pattern is pretty clear, so I can't think of any pointers off the top of my head. The yarn I bought (2 skeins) is just about enough for each sock. I'm excited to finish the project -- I just have the toe left before starting the second sock. Will update the post when I'm done! (01.09.2012)
Posted by Kristin at 10:49 AM