Back in Maryland, where I grew up, we had a saying that March "came in like a lion, and went out like a lamb." After living in Minnesota for several years, I would characterize this March as mostly lambish, at least in terms of weather.

I went out of town twice this March, once back to Maryland, another time out to Seattle, WA. In between I caught the plague and am finally getting my lungs, sleep schedule and classwork back in order from all of the chaos. Things are settling down just in time for March to be over, so now my life feels more lambish as well.

There hasn't been much time for crocheting, but I've had a couple of things floating around. Here I am crocheting away at a friend's place. I decided that the nice weather demanded a colorful yarn bomb, so dug out my scrap stash to see what could be done. I finished the project, but still can't decide where to "bomb," so I'll leave the rest of the project for another post!

BTW, if any of you bombers have tips for success, please let me know. I keep looking at the undersides of bridges, fences and bus stops, wondering how, erm, legal it would be to put something up, as well as how likely yarn would be to stay put any amount of time afterward. 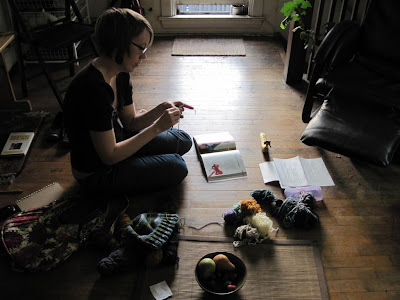